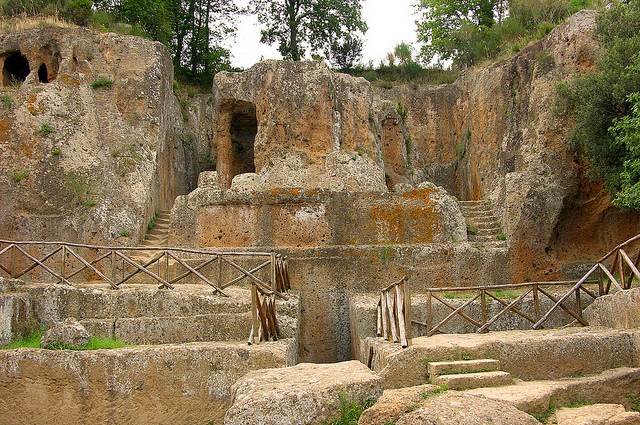 The Città del Tufo Archaeological Park is the museum network of the Municipality of Sorano which includes various points of interest located throughout the municipal area. The Etruscan necropolis of Sovana and the Museum of San Mamiliano (Sovana), the Rock Settlement of San Rocco and the Archaeological Civic Museum Fortezza Orsini (Sorano), the Rock Settlement of Vitozza (San Quirico) are part of this network.
In Sovana, the part of interest is located a few kilometers beyond the hamlet along the road that connects the village to San Martino sul Fiora. Here is the whole area of the Necropolis, a historical heritage of inestimable value consisting of tombs and vie cave.
The first part of the necropolis extends for about a kilometer and a half and has an almost uninterrupted row of cube and semidado tombs.

The Sovana Necropolis is part of the Città del Tufo Archaeological Park in the municipality of Sorano.

It is located a few kilometers from the village of Sovana along the road that connects the village to San Martino sul Fiora. It is about a historical heritage of inestimable value consisting of numerous tombs and vie cave.

The first part of the necropolis extends for about a kilometer and a half and has an almost uninterrupted row of cube and semidado tombs.

Among these stand out some monumental tombs with a colonnade and aedicule front with decorated pediment: in Poggio Prisca(Pola tomb and the winged Demons tomb); at Poggio Felceto (Ildebranda tomb); at Poggio Stanziale (tomb of Typhon).

The Ildebranda tomb (III-II century BC) is probably the most famous of the whole Necropolis. Completely excavated in the tuff, it looks like a monumental temple with a six-column portico. The burial chamber, in which a single depository platform has been carved for the deceased, can be reached through a long central corridor downhill. The room was found completely empty, a consequence of an ancient looting or the action of grave robbers. The name was given in honor of Ildebrando di Soana, better known as Pope Gregory VII. The tomb was made known by Gino Rosi in 1925, who published a first report.

Going past the tomb of Tifone and following the signs, you come to a large Via Cava called “Il Cavone”. If the history of the vie cave in the area is shrouded in mystery, that of Cavone, given its size, is even more so. About one kilometer long and two to four meters wide, the Cavone can be considered a highway compared to the other cave roads in the Sorano and Pitigliano area which are much shorter and above all narrower.

The Vie Cave are works of Etruscan origin unique in the world, a heritage of enormous historical and cultural importance and arouse an irresistible attraction. Between the territory of Sorano and Pitigliano there are a few dozen and they vary in size (the Cavone in Sovana is certainly the largest). You can go on foot or on horseback and strolling along these paths offers great suggestions. Why the Etruscans built these streets carved into the tuff is still a mystery today, some hypothesize a sacred and funerary use (almost always they are close to the necropolis), other theses argue that they were simple connecting roads or even works for the outflow of water. The only certainty is that they must have been of considerable importance, (it is estimated that 40 thousand tons of volcanic rock were removed to build the Cavone alone).

After visiting the first sector of the necropolis (Tomba Ildebranda) you can proceed on foot on the pedestrian path that runs alongside the SP22 towards Sovana.

After about two hundred meters you arrive at the second sector of the Necropolis which includes the Church of San Sebastiano, the Tomb of the Siren (the most important), the Tombs in Semidado and the Via Cava di San Sebastiano.

The tomb of the Siren (III-II BC), is located on top of a rise and is a shrine tomb entirely dug into the tuff. The façade reproduces a false door, inside which the image of the deceased represented as a symposia is carved, the door is guarded on the sides by two demons, probably Charun and Vanth. The name derives from the frieze in which a mermaid is not represented, as is commonly known, but the sea monster Scylla caught in the act of sinking a ship. Above the image of the deceased is clearly legible the inscription “Vel Nulina”, “Son of Vel”. A particularly narrow dromos leads to the burial chamber, which is offset from the shrine. The small size of the chamber suggests a burial for a single individual. The tomb was first described by the English painter Samuel Aisnley who was addressed there by the locals.

Continuing on this path, you reach the necropolis of San Sebastiano, where you can cross the Vie Cave of the same name which cuts some chamber tombs from the Archaic period to finally reach a rock oratory with two rooms.