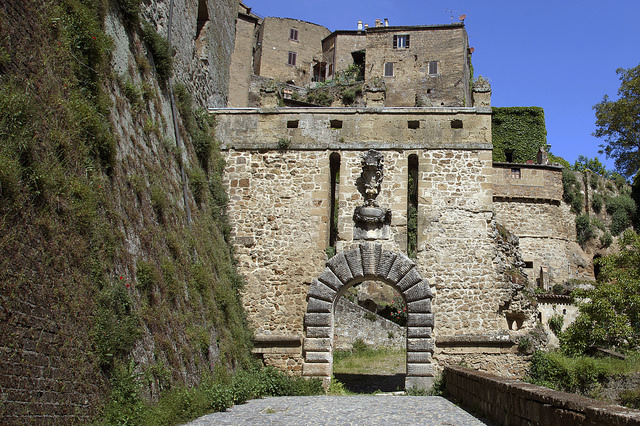 The historic center of Sorano is undoubtedly the pride of the town, resistant over the years to the collapses and landslides of the tuff rock on which it stands.
Start from Piazza del Municipio crossing the Arco del Ferrini. The whole area is made up of narrow alleys and alleys as well as numerous steps that descend towards the valley of the Lente river. Thanks to this feature from the village you can admire very interesting views.
The main street reaches the Collegiate Church of San Nicola, a 13th century church that preserves a valuable baptismal font from 1563, a 15th century lava stone ciborium and a canvas by Raffaello Vanni. Next to it is the Palazzo Comitale with its travertine portal with the inscription in memory of Ludovico Orsini.

Behind this building, the Clock Tower is clearly visible which rises above the Masso Leopoldino, one of the characteristic elements of the “Matera Toscana”. On the top of the Masso a terrace allows you to admire a splendid panorama.
On the north-east side of the village you arrive at the Porta dei Merli, an ancient gateway to the town, originally also equipped with a drawbridge.
Another characteristic element of the historic center of Sorano is its walls. The walls of Sorano represented a perfect defensive system for the city in medieval times. Today they appear as a whole with two imposing fortifications (Fortezza and Masso Leopoldino), two access gates and various sections of curtain walls often incorporated with the external walls of some buildings in the village.
A primitive wall was built by the Aldobrandeschi in the twelfth century, facilitated by the area where the ancient village stands, which is already in itself “above” a natural defensive system. On the highest hill the walls incorporated the complex of the Rocca Aldobrandesca, which dominated the entire town of Sorano from above. From there, the curtain wall descended downwards and then went up again to the other hill on which the village develops.
In the Renaissance the Orsini strengthened the Rocca (as they did in nearby Pitigliano) making the two structures of the Città del Tufo symbols of the power of this family. During this period the complex of the current fortress was strengthened and the two access gates to the town (Porta di Sopra and Porta dei Merli) were restored. In the Grand Ducal era, the Lorraine family built the current Masso Leopoldino on the other hill of the city, this part of the complex adapted perfectly to what had already been done previously despite the construction being more recent.
Do not forget that throughout the historic center of Sorano there are numerous artisan shops and various places where you can taste the excellent local Maremma / Amiata cuisine and local products such as meats, cheeses and wine.